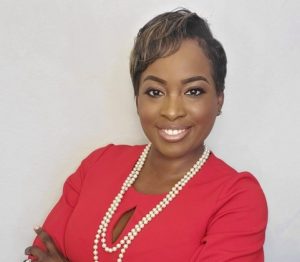 Shamere McKenzie is a consultant, activist, subject matter expert on human trafficking and a sought-after award winning internationally recognized speaker and trainer. Turning her past adversities into an opportunity to liberate and protect others, Shamere has brought about social and political change in America and around the world.

Shamere has a strong passion for education and policy and is the Chief Executive Officer for Sun Gate Foundation, an anti-trafficking organization that provides educational opportunities for survivors of human trafficking. Additionally, she serves as the Training Manager for the National Human Trafficking Hotline. Shamere is also the co-chair for the victim’s services committee of the Maryland State Human Trafficking Task Force. As a former Program Director, she authored an anti-trafficking program from the ground up and oversaw an emergency residential program for adult survivors of human trafficking.

In 2018, Shamere responded to a call from the Ministry of Justice in her birthplace, Jamaica, and currently serves as the first appointed Anti-Human Trafficking Ambassador for Jamaica.

Shamere works tirelessly to raise awareness on human trafficking by speaking at universities, conferences, community events, and consulting with government officials around the world. She has trained a variety of professionals on how to identify and respond to victims of human trafficking, including the FBI, Homeland Security, Bureau of Diplomatic Security, churches, hotels and airline staff to name a few.

Her lived experiences with sex trafficking have been featured in several books including a college textbook focused on social justice. In addition, her story has been featured widely, on television, radio, documentaries, and in blogs. Her most recent documentary was released on the island of Aruba on September 25, 2018 entitled False Promises. The documentary serves as a tool to educate youth in the Caribbean about sex trafficking.

In 2015, she graduated from Loyola University Chicago with her Bachelor of Science degree in Criminology and Criminal Justice. Additionally, she serves on several boards, advisory boards and speaker’s bureaus and have received numerous awards in recognition for her work.

Her strong determination, passion for success and her faith in Jesus Christ helps her to keep her eyes on the prize. Shamere does not consider herself a victim because she is no longer enslaved; she is not a survivor because she is more than surviving; but, she considers herself a liberator – one who has broken free from the chains of her past, determined to pave the way for others who have been enslaved.